Xmas Happiness for the Rhino Babies and their Carers:

As always, we do our best to make Christmas extra special for the #WildBabies and caring Staff at The Rhino Orphanage. This year was our 6th Annual Xmas Supply Drop. With the loving care and help of our local community and our valued donors, we were able to perform some miracles during the end of what has been a most challenging year for everyone.
We have been consistent and ongoing supporters of The Rhino Orphanage for the past 5 years, and have supplied countless capital items, veterinary equipment, specialized medicines and food. This is an ongoing support project where we make sure that your donations directly reach its target.

We pride ourselves on trying to procure every single item on TRO's wish-list, and this year was no different. Loads of probiotic Protexin, industrial wheelbarrows, soap of every conceivable kind, special dual rakes, many liters of disinfectant, 1000 latex gloves, facemasks for the 'new normal', and so much more! 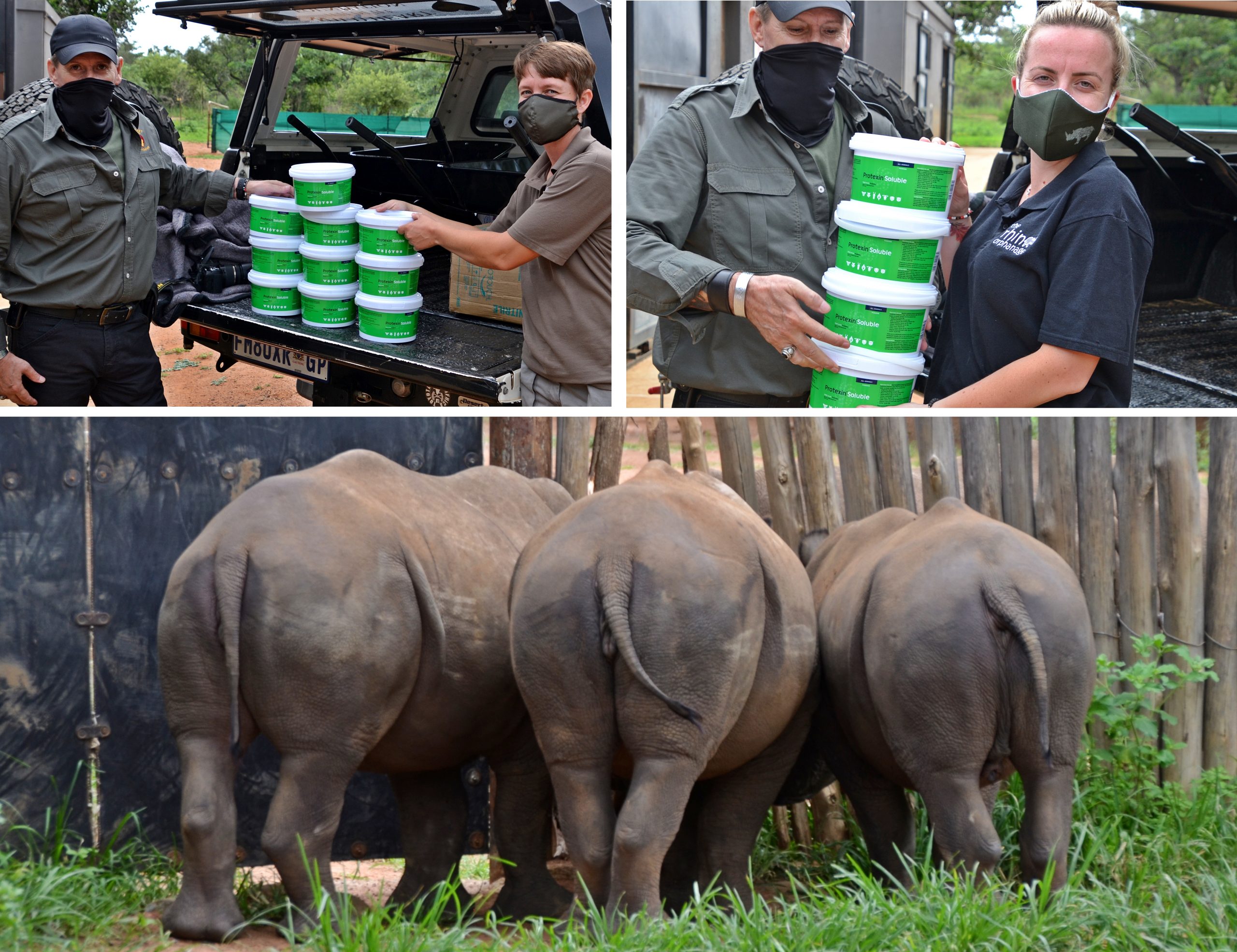 The Value of Consumables:

If 2020 taught us anything at all, it is the value of toilet paper, so we made sure the human

mommies have plenty of that! General soap, disinfectant and cleaning materials are always welcome too - anything that makes it easier to help the Rhino Orphans survive. 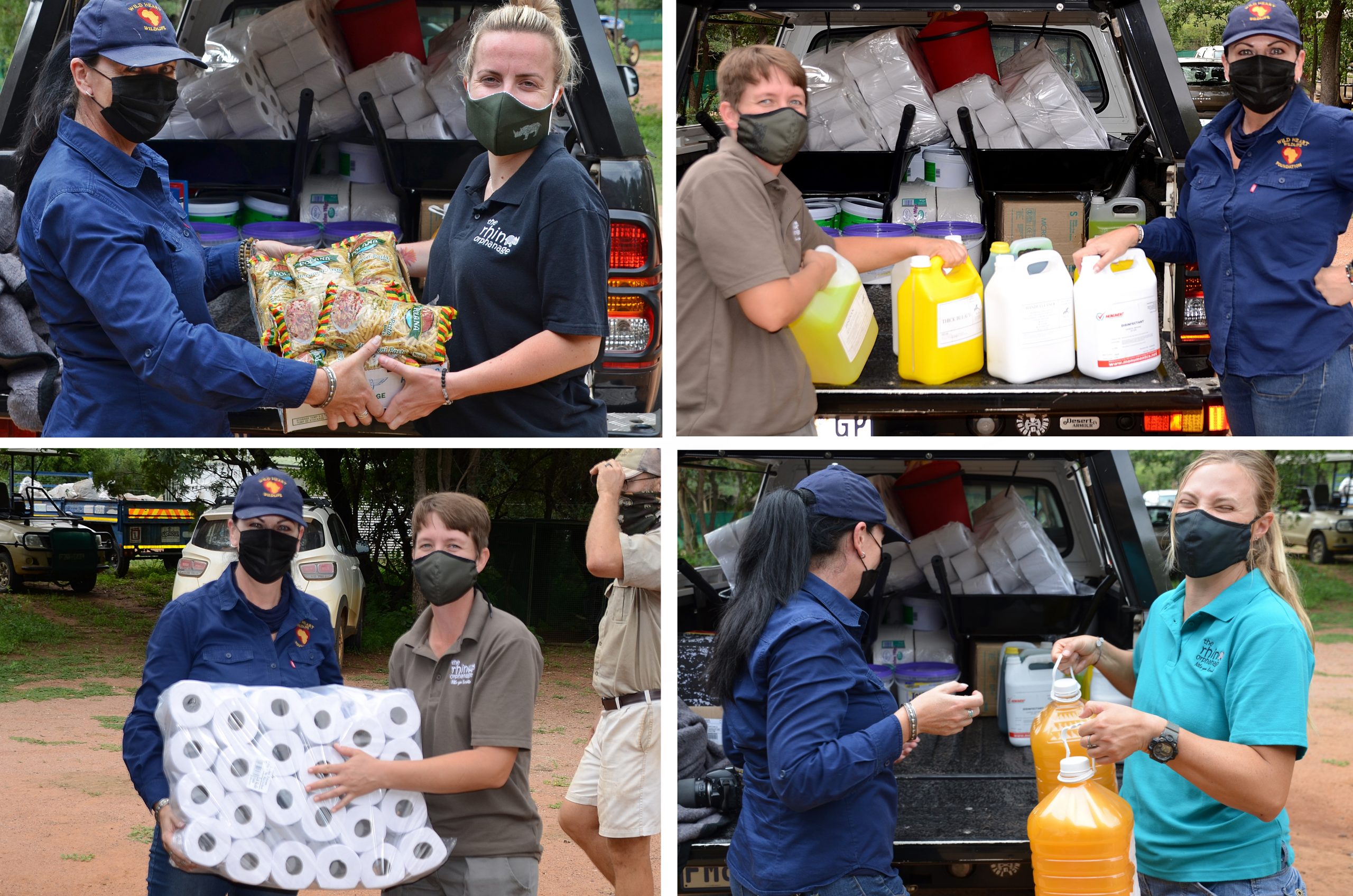 The girls were particularly excited about the emergency spot-light that would make night time treatment easier. The Carers received some treats too - it is after all, their job to spend countless nights next to a sick Rhino Orphan - doing their bit to help them survive! 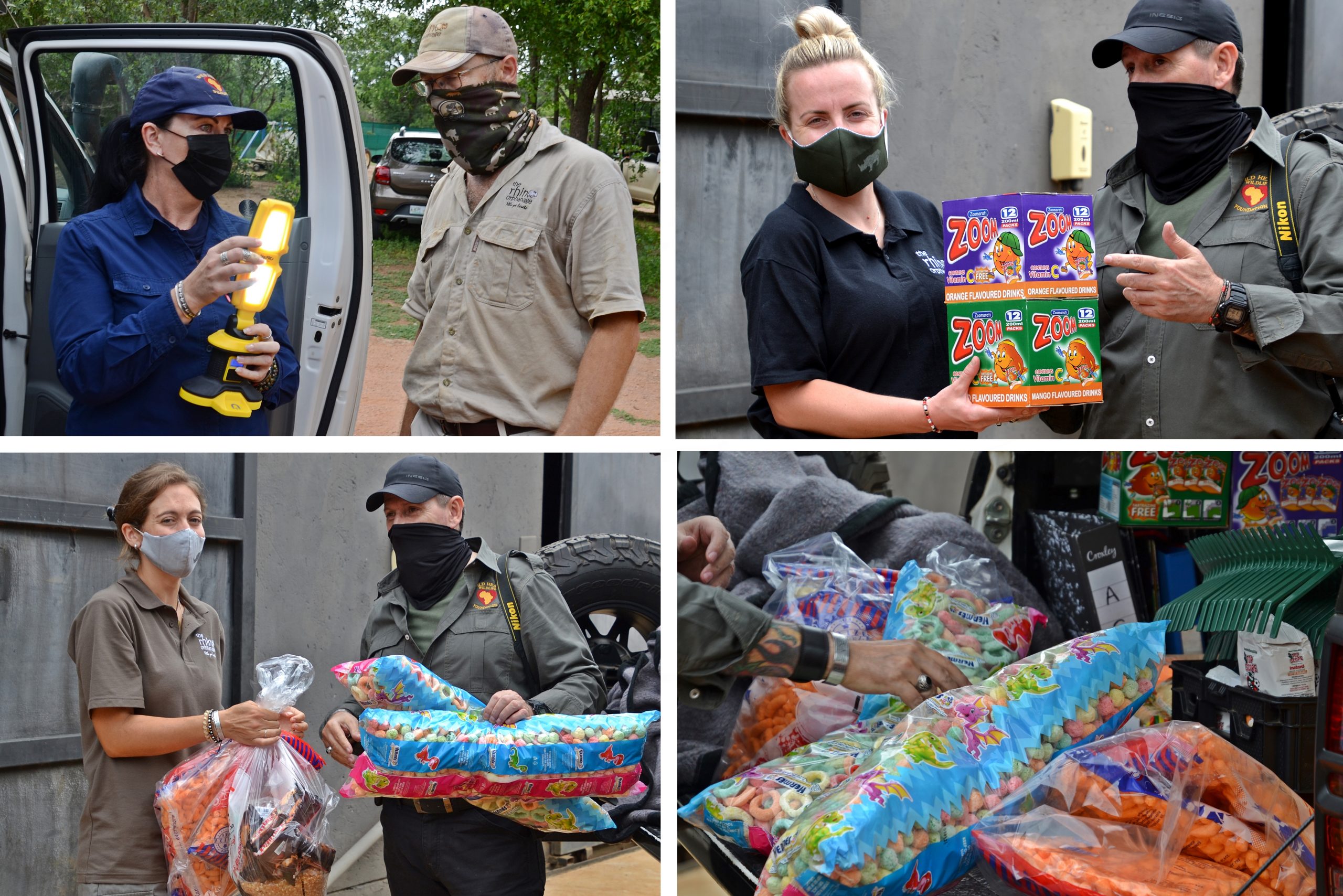 Rechargeable Emergency Spotlight for night-time emergencies, and some snacks for the carers © Wild Heart Wildlife Foundation

The cherry on top of the cake is a complete telescopic pole syringe system, with every size of syringes and attachments available. This is like a syringe on steroids, enabling the treatment of an animal from about 4-5 meters away, and is particularly handy for use with dangerous or scared larger rhinos. This valuable, expensive piece of equipment is on every true Wildlife Rehab's wish list. Rehabilitating Rhinos is physical hard work. Industrial wheelbarrows help make the load a little lighter.

Wild Heart 'Santa' Bumper Supply Drop for The Rhino Orphans:
Our lives have changed irrevocably, and we have to adapt. The animals have no choice - they rely on us. We have to continue doing our best for the animals, and also helping the humans who care so much for them.
From our side, WHWF gifted The Rhino Orphanage's Arrie and Mariet Van Deventer with one of our first ever, Limited Edition Big 5 Calendars, as a small token of our appreciation for their dedication.
𝐓

𝐔
Thank you to every single person who donated and assisted in any way.
You are all superstars, and we cannot mention anyone, because the list is too long.
Thank you for making this Xmas special for the Rhino Babies, and their carers. 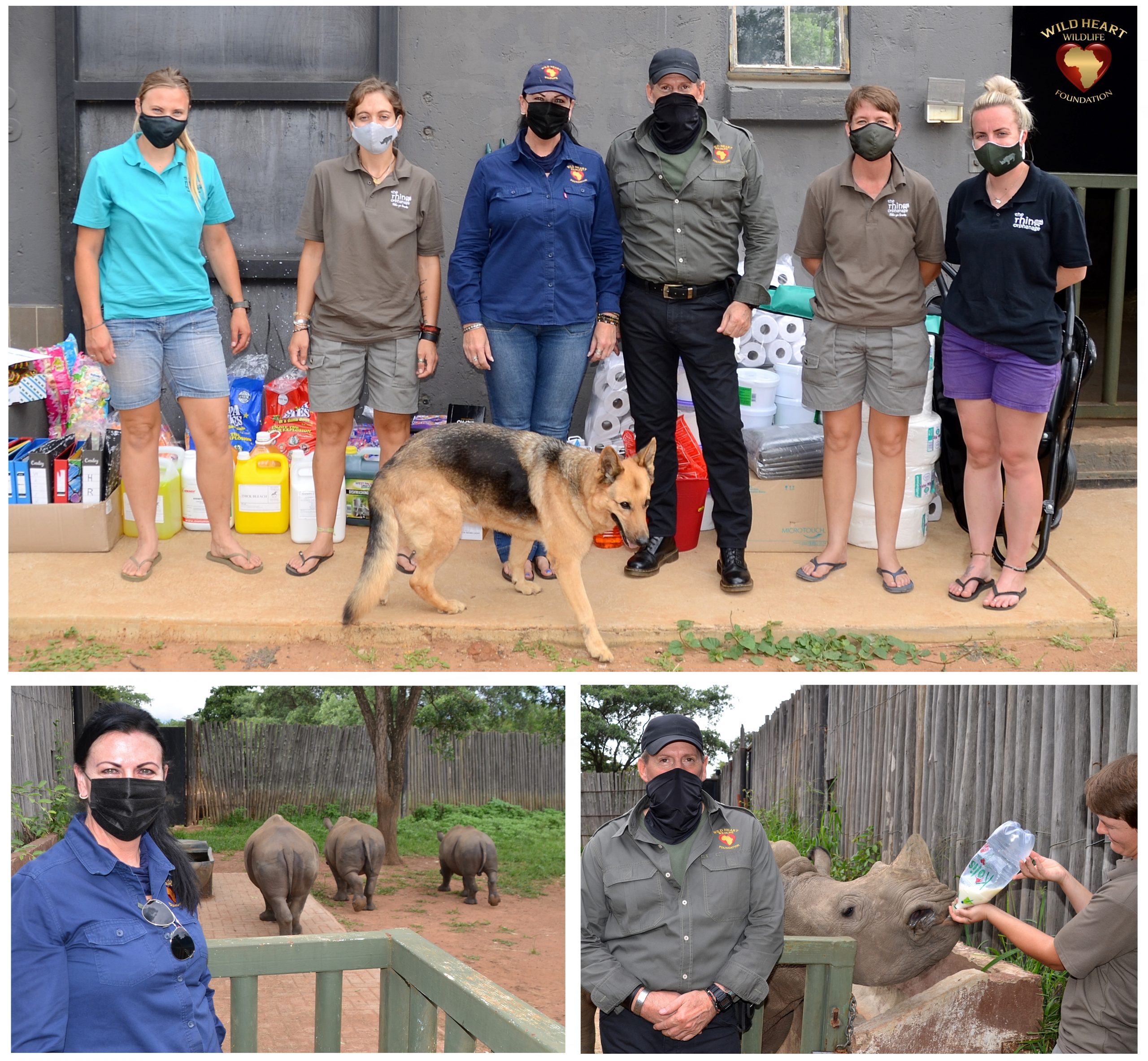 To see more of what we do for the Rhino Orphans, click here.

We rely completely on donations from the public to do our work all across Southern Africa. As always, we show you exactly what we do with your loving donations.
#WHWF
#EthicalConservation
#DoingWhatWeSay
#ShowingWhatWeDo

This afternoon, a friend of mine had a horrifying incident where poachers attacked and killed his last remaining giraffe. She was an old female, beloved by the family. Upon first injury, a shot to her head with a .22, she raced to the homestead seeking help and safety. She was bleeding copiously from her head, but the shot was not fatal. She was then chased, by the poachers, back into the bush, where she was then shot dead.

This particular giraffe was the mother of Missy and Skye, who both reside here at Wild is Life.

During this melee, a neighbouring farmer was shot in the leg, whilst trying to help apprehend these poachers. We salute his courage and all those who rallied around to catch these butchers of our national heritage.

Did you know that there are an estimated 8000 giraffe left in Zimbabwe?

These numbers are truly horrifying.

One the most iconic species of the African landscape is under serious threat.

There are many ways to tackle giraffe conservation and there are already a few good NGO’s who are working towards this. However, more needs to be done. With speed.

Wild is Life Trust has every intention of stepping up to this plate, where we can. We see action as follows:
- Increased awareness of the plight of Giraffe, particularly the Southern Giraffe (Giraffa Giraffa Giraffa)
- Bushmeat poaching prevention through our anti poaching units in our landscape areas
- Vigilance in the maintenance of powerlines (prevention of electrocution)
- Rescue of orphaned giraffe (which we have already done to a small extent)
- Treatment of snared and injured giraffe
- Engagement, including our existing collaborations, with NGO’s committed to giraffe conservation
-
This list is not exhaustive, but it’s a good start. Any support would be hugely appreciated.

We would like to thank @Save Giraffes Now for their first donation towards a dedicated boma for giraffe rescue.

Best friends don’t have to look anything alike to make a great team, just as these unusual animal friendships prove.

This is the incredible moment a 25-stone gorilla cradled a wild bush baby the size of its finger in its huge palms.

This is definitely a sight to behold.

Over 300 rescued animals live at Ape Action Africa, Cameroon – a sanctuary dedicated to the conservation and protection of endangered primates like gorillas, chimpanzees, and monkeys.

Bobo, a western lowland gorilla, arrived at the sanctuary back in 1994 as a small and vulnerable 2-year-old toddler, after his mom was killed by poachers. Over two decades later, he’s a strong, huge silverback gorilla, the leader of his group at the sanctuary in Cameroon.

But even though Bobo is the dominant male of his group, he’s known to be a gentle giant. And Bobo’s gentleness was never more apparent when the caregiver found Bobo cradling a tiny wild bush baby he’d discovered in the forest.

Most likely the tiny creature had been living inside Bobo’s group enclosure. But even so, it’s quite fascinating to watch it interacting in such a friendly manner with its giant neighbors. “The bush baby showed no fear of Bobo,” Elissa O’Sullivan, spokesperson for Ape Action Africa told Bored Panda. “He moved around his body and spend his time hopping around in an open grassy area, before choosing to return to Bobo.”

“Bobo’s group-mates were desperately curious, particularly his favorite female Avishag, but he kept them all at a distance, making sure that no one disturbed his new friend,” the sanctuary wrote. “Bush babies are usually nocturnal so it is very rare to see one, and even rarer to witness this kind of interaction. The little bush baby was happy to play in Bobo’s arms, hopping off to explore the grass nearby, before returning to Bobo’s hand.”

The other gorillas – three females and three young males, soon became very interested in Bobo’s new friend. However, Bobo suddenly became overprotective with his tiny companion and he kept his group away from it. “Bobo’s group-mates were desperately curious, particularly his favorite female Avishag, but he kept them all at a distance, making sure that no one disturbed his new friend,” the sanctuary wrote. “The little bush baby was happy to play in Bobo’s arms, hopping off to explore the grass nearby, before returning to Bobo’s hand.”

Wild Heart Wildlife Foundation18 hours ago
The illegal Wildlife and Pet Trade is decimating the Wild Populations, of all kinds of animals. In this case - for muti (traditional medicine):

African grey parrots in traditional medicine - Africa Geographic
African grey parrots are targeted for medicinal and spiritual practices in West Africa. The trade is a significant threat to grey parrots
africageographic.com
View on Facebook
WhatsApp us
This site uses cookies: Find out more.